The owners of Kambako Safaris, Jumbo Moore and his four business partners, invested in hunting concessions in the Niassa National Reserve and Coutada Nicage in Cabo Delgado province, late in 2004.  As part of the deal, they obtained the coastal property on which Pemba Beach Lodge is situated today. Except for an old farm house, there was no infrastructure. Kambako’s partners rented a villa in Pemba and started to lovingly develop Pemba Beach Lodge, its access roads, water and power reticulation and it gradually grown in what you find there today.  Apart from creating many temporary as well as permanent jobs, the Lodge’s development has benefited the entire area and indeed local villages by bringing infrastructure to the area that did not exist before. Initially, the lodge was a simple, open plan building with breezy bedrooms, dining area and a pizza oven, catering for adventurers, backpackers and the safari industry. Over the past decade, and since the discovery of oil and gas deposits off the coast of Mozambique, Pemba and indeed Pemba Beach Lodge has shown amazing growth.  Today, the Lodge caters for the most discerning traveler and holiday maker’s tastes, whilst still retaining its secluded, yet conveniently-close-to-town, ambiance. 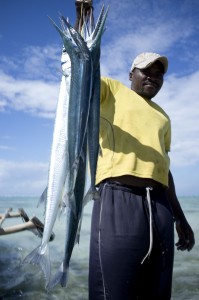 Local contractors were used for all our development and building. Roads were developed. Pipes were laid by local contractors, for municipal water that is 3km away.
Only local hardwood, macau and mahogany, have been used in the Lodge. The local fishermen have been continually supported. Our fish is bought fresh, straight from the beach.
All our staff come from the local community.
Our roads service a couple of villages nearby.
We have contributed to building classrooms for local schools and provided a new roof for one school.
We have contributed to the establishment of a local police station right on our boundary and make a monthly contribution to the police force.
All the roads in the lodge are built using local contractors.
We have developed substantial vegetable gardens and planted orchards of fruit trees.
Our venison is supplied locally from the bush.